Finally, in Love Again (最後の恋、僕にください Saigo no koi, boku ni kudasai) is an interactive romance novel developed and published by Voltage. The game was released on Apple and Android devices on 29 July 2014 in Japanese and 10 September 2014 in English.[1] It is the 21st game released in English as part of Romance Sims. Additionally, it is one of the games featured in Sweet Cafe by Voltage. 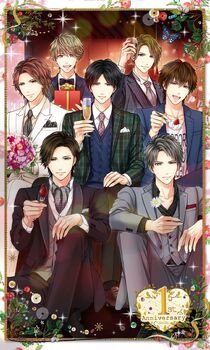 First Anniversary Campaign for Finally, in Love Again
Add a photo to this gallery

Retrieved from "https://voltageinc.fandom.com/wiki/Finally,_in_Love_Again?oldid=8488"
Community content is available under CC-BY-SA unless otherwise noted.