Be My Princess 2 (王子様のプロポーズ Season2 Ōji-sama no Puropōzu Season2) is an interactive romance novel developed and published by Voltage. The game was released on Apple and Android devices on January 14, 2014 in Japanese and May 14, 2014 in English.

One day, you receive a mysterious invitation to attend a marriage interview with the prince!

You don't know how it's possible, but the prince has fallen in love with you at first sight.

"I can't imagine marrying anyone else."

「王子様のプロポーズSeason2」OP
Japanese commercial for Be My Princess 2 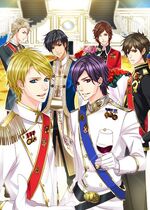 Retrieved from "https://voltageinc.fandom.com/wiki/Be_My_Princess_2?oldid=9160"
Community content is available under CC-BY-SA unless otherwise noted.