10 Days with My Devil (悪魔と恋する10日間 Akuma to Koisuru 10-Kakan) is an interactive romance novel developed and published by Voltage. The game was released on Apple and Android devices on 13 March 2013 in Japanese and 7 August 2013 in English.[1] It was the 10th game released in English as part of Romance Sims. Additionally, it is a featured game in Sweet Cafe by Voltage.

The game starts out with you meeting the demons in disguise throughout the day. On your way back home, a dog keeps you from going back to your room, and thus saves you from an explosion that was supposed to kill you. The demons you met before then confront you, explaining about your would-be death and how your soul was to be sent to Heaven. After recovering from your initial disbelief, you subsequently plead for an extension of 10 more days to live, to which they agree on the condition that you stay with them and initiate a contract with one of the demons for the sake of your protection. 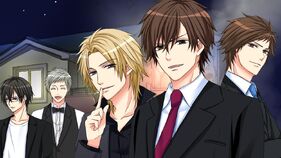 The characters of 10 Days with My Devil, shown in prologue
Add a photo to this gallery

Retrieved from "https://voltageinc.fandom.com/wiki/10_Days_with_My_Devil?oldid=8417"
Community content is available under CC-BY-SA unless otherwise noted.